Rajasthan Forest Biodiversity Project Phase II is being implemented with the financial assistance of Japan International Cooperation Agency (JICA). The project is launched with the objectives to enhance forest area and livelihood opportunities of the forest dependent people and to conserve biodiversity by undertaking afforestation and biodiversity conservation measures through JFM (Joint Forest Management) approach, thereby contributing to environmental conservation and socio-economic development of Rajasthan.

The following were the activities which we carried out in 2013-14 related to village micro planning: 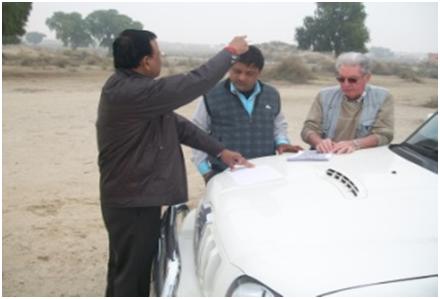 Micro planning is s backbone of all kind of activates for the project. Micro plan lists out all activates required for proper integrated socio-economic development of the village and its inhabitants taking into account the natural, ecological, social, human, animal and skill based resources of the village. The preparation of micro plan shall be undertaken in all project villages by NGO with the participation of village members. Participatory Rural Appraisal (PRA) methodologies shall be used to identify and prioritize the project in the village.

Preparation of a micro plan is by an NGO with involvement of majority of village4 members in attendance of FMU officers after extensive Participatory Rural Appraisal and Rapid Assessment and situation Analysis.

Micro Planning shall be f9ollowed in the process of Community Problem Analysis, Visioning, Goal setting, SWOT Analysis, and Res9ources Planning.

At the same Time, VFPMC/EDC shall be formulated and Executive Committee fo VFPMC/ EDC will be elected from members of VFPMC/EDC by members of Gram Penchant as per the Provision of "JFM Resolution 2000".

A micro plan of a village shall be finalized and approved by the Executive Committee of the VFPMC/EDC and sanctioned by the concerned Deputy /Conservator of Forests. It is to be subsequently scrutinized by the PMU celled Project Monitoring and Appraisal Group (PMAG).

Based on the approval and scrutinizes Micro plan, budget allotment shall be made to DMU, which shall further forward to VFPMC/EDC.

Prior to initiation of the Project activates, each VFPMC/EDC and DMU will sign memorandum of Understanding (MOU) on the implementation of all activates based on approved micro plan for the village, MOU includes sharing benefits and usufructs, sharing of returns from intermediary and final harvests, various rights. Duties and obligation of each party concerned.

The prepared micro plans shall be reviewed and if needed suitably amended at an interval of two years by NGOs with involvement of VFMC/EDC, which have by to be approved by each DMU.